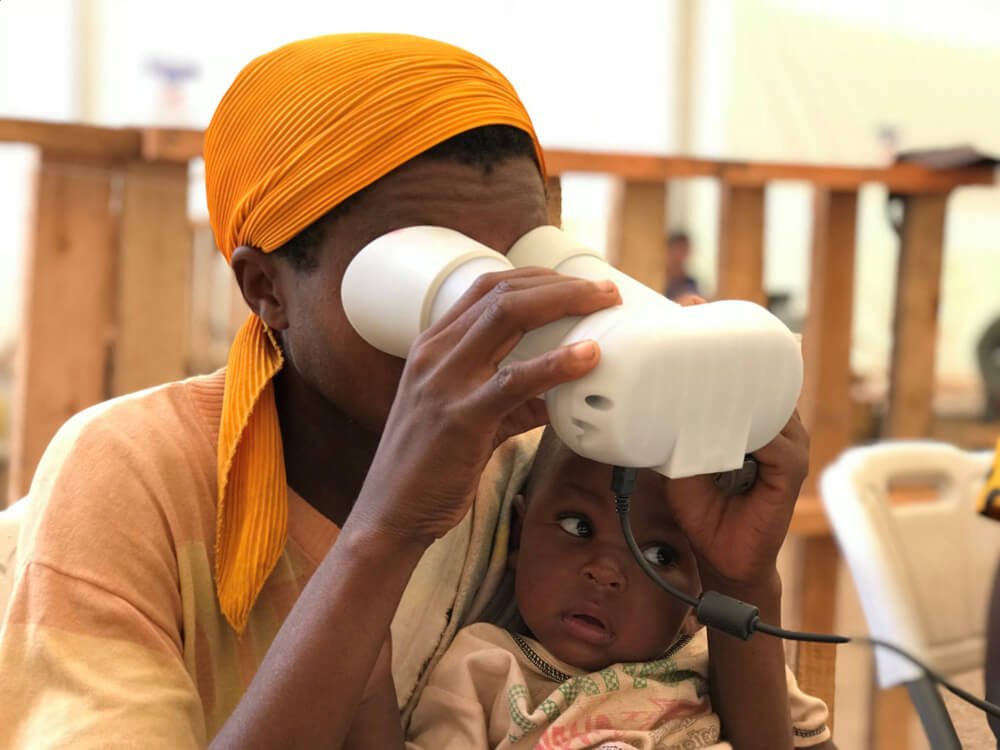 A Congolese woman uses an iris scanner for biometric identification to receive food in Uganda, under the new WFP procedures. Photo: WFP/Claire Nevill

The sound of intermittent beeps as ration cards are scanned signal it’s the dawn of a new era in Oruchinga refugee settlement, Southwestern Uganda. Gone are the days of flicking through reams of paper to verify and tick names off — from now on it will be a swift scan of a refugee’s ration card and irises to — bring up their biometric data and identify them for receiving food.

The Government of Uganda and the United Nations Refugee Agency (UNHCR) with support from the World Food Programme (WFP) are working to biometrically verify all refugees in Uganda by the end of the year. The refugee biometric verification exercise currently underway in Uganda is the largest in history, and uses UNHCR’s biometric registration software to collect personal data about refugees, including iris scans and ten finger prints. WFP is using its logistical prowess and deploying rapid response teams to set up the sites for the country-wide verification exercise — and then use these centres for food distribution each month.

The barcode is scanned on a person’s ration card as they leave the site to confirm they have received their monthly entitlements from WFP. Photo: WFP/Claire Nevill

Oruchinga is the first-ever refugee camp in Uganda where a food distribution is being carried out using these biometric checks. A wave of calm order sweeps through the WFP tent where Congolese, Burundian and Rwandese families sit in the cool waiting area. Their laps and arms are laden with empty sacks and plastic bottles — to be filled from the vats of food awaiting in the corridors next door. Maria Macumi a Burundian mother of four, sits down in front of a WFP verification clerk and receives the iris scanner with both hands. With no fuss and less than a minute later, she is queuing up to collect her family’s monthly food from WFP. 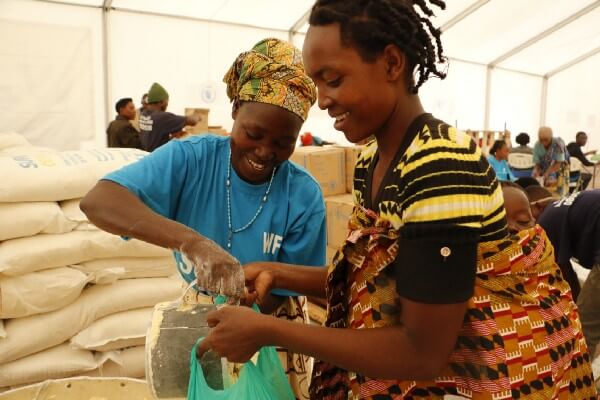 “When my eyes and card are scanned, my photo comes up on the screen. I know it’s fair because WFP will give food to the right person,” explains Maria.

Maria then moves on to collect her food in scoops from WFP for the first time. Previously refugees in Uganda were collecting and sharing food out in groups of up to 30 people. Maria’s baby Remi sleeps soundly fastened on her back as she bends to hold the sack open for the beans to pour in.

“It was always a fight and a scramble — a real challenge when I had my baby on my back,” Maria says. “It is now a lot less hectic.”

Maria came to Uganda eight years ago, after her husband was brutally murdered by members of an opposing political party in Muyinga province, Burundi.

“I knew they were looking for me and my children too, so I ran to Uganda,” says Maria. “It’s been peaceful for us here and I can get some small money from farming for soap and clothes, but I still need the food from WFP to feed all my children.” 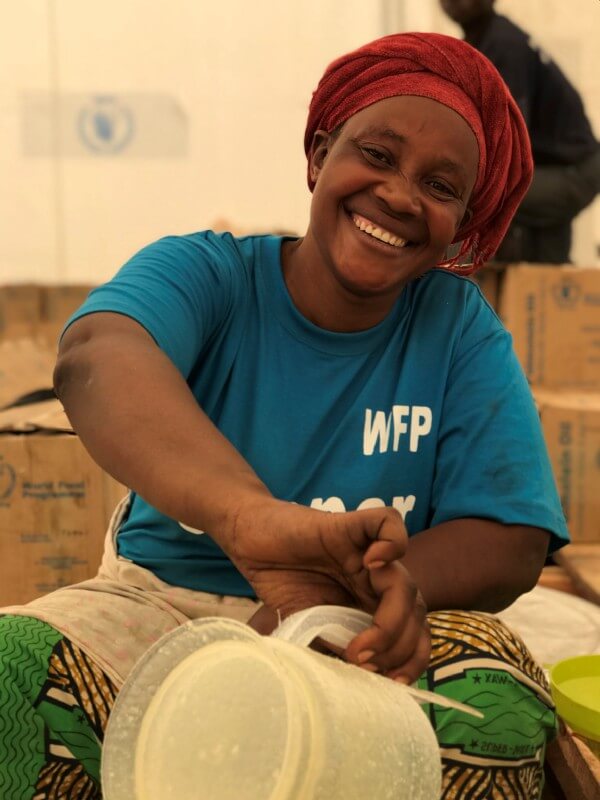 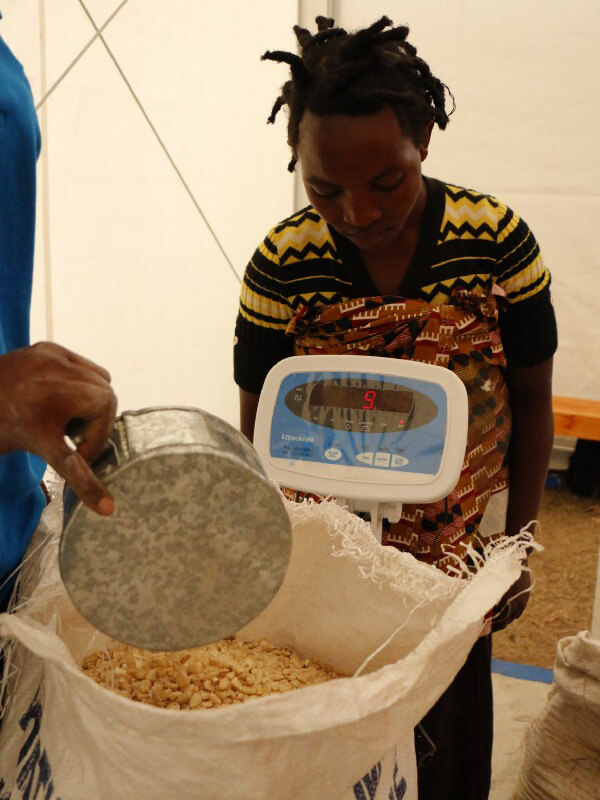 L: Jenirose, a ‘WFP scooper’ and Vice-chairperson in her community believes the new food procedures are for the better. R: Maria watches her family’s maize get weighed electronically under new WFP regulations. WFP/Claire Nevill 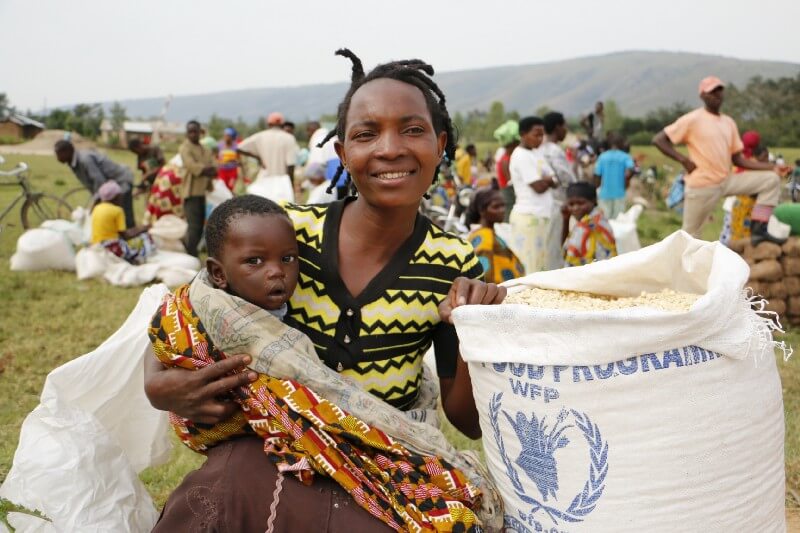 Maria and her baby Remi, after collecting food at the new site in Oruchinga. WFP/Claire Nevill

At the end of the corridor, Maria watches as each sack of food is weighed electronically.

“Before I never trusted the amounts I was getting — as people would interfere. Now I am sure I am getting the right amounts of food,” Maria says with a smile. “Just promise you won’t change things back to how they were.”

The reaction of all refugees to the new food distribution set-up and biometric checks make it clear these are changes for the better. As Maria leaves the WFP centre, her ration card is scanned one final time to confirm she has received the right quantities.

Matt Nims, acting director of Food For Peace, and Valerie Guarnieri, assistant executive director of WFP, came to visit the food distribution in Oruchinga. WFP has introduced the new food collection procedures to transform and take refugee food assistance to the best possible standard across the country — this includes the biometric data checks, a universal ration size, scooping and weighing the food on electronic scales. Nims labelled it a “gold standard,” and encouraged WFP to make it the standard for delivering food assistance to refugees everywhere in the world.

“For the past two years WFP has been calling for biometric registration of refugees in Uganda, and this became even more urgent last year — when Uganda became the largest refugee hosting country in Africa,” explains Guarnieri. “To be able to manage such a large caseload, we need to have a more modern and efficient system in place. This new system allows us to validate each person on site and make sure they get the assistance that they’re entitled to.” 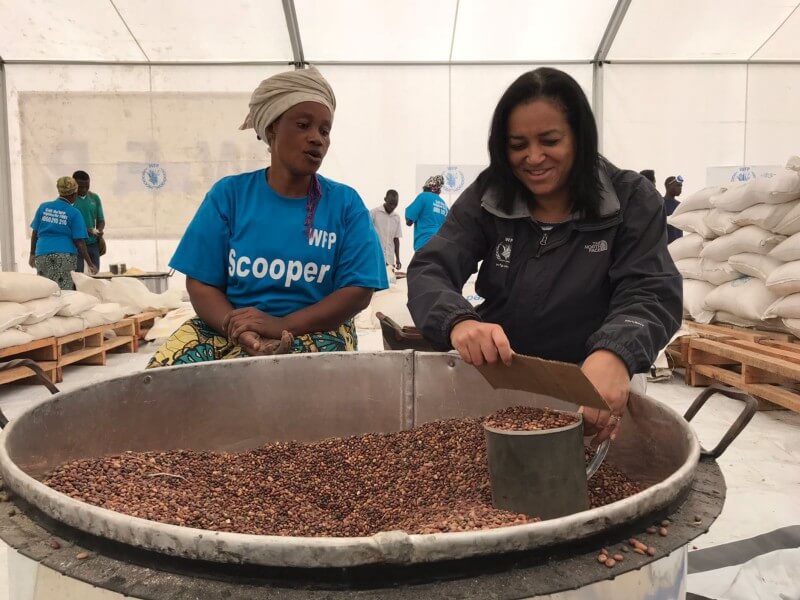 Valerie sits beside Jenirose — a Congolese refugee, WFP ‘scooper’ and vice-chairperson of the Oruchinga community. Together they scoop beans into refugees’ bags and chat about the new changes and introduction of biometrics to Jenirose’s community.

“As a refugee, I would want fair treatment, I would want the humanitarian community to treat us with respect and to show compassion. The changes have shown that WFP loves us — I feel we have more dignity when we collect our food like this. My children are having three meals a day now because we’re getting the right amounts — and I am happy to see them grow strong.”

Telling the refugees about the new changes through a two-way and community-based approach is a big priority for WFP. As far as possible WFP is involving the refugees themselves in the outreach and messaging and tailoring the information campaigns to each settlement. In Oruchinga, a Congolese youth drama group toured the settlement — bringing the new scooping collection procedures to life by acting out scenarios and WFP messages in a role-play. This drama group also brought feedback for WFP to respond to on its public address system travelling around the settlements beforehand or on the day at the food distribution. 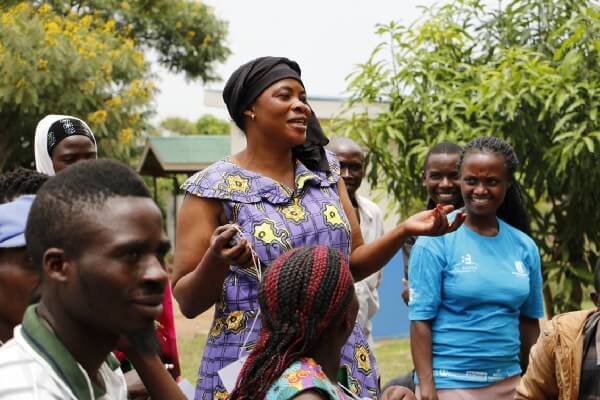 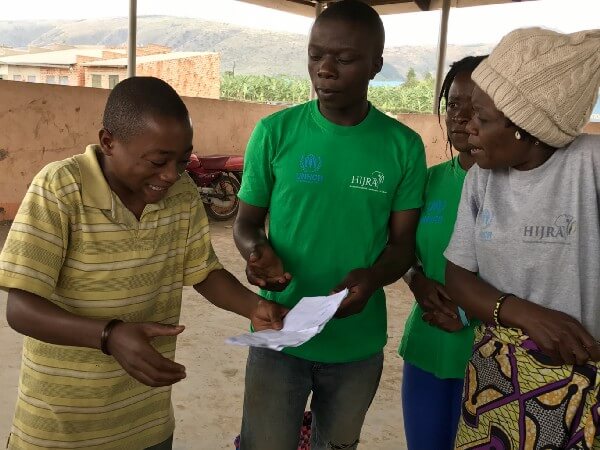 By the end of the food distribution on March 8, 6,710 individuals had been served out of 6,983 refugees verified by UNHCR. UNHCR handled 217 problem cases, where data in the system did not match the information being presented by the person coming to collect food. For the first time in Uganda, the Government could account for every single person who received food assistance from WFP.

The huge biometric verification exercise will be rolled out to cover more than 30 locations across the rest of the country and biometric checks will be introduced at the 180 food distribution sites by the end of the year.